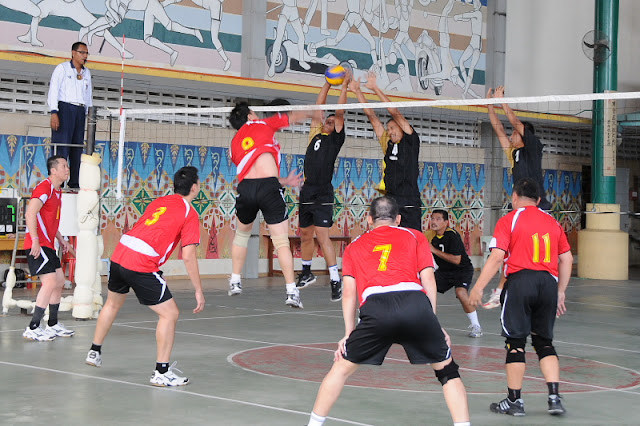 Do continue visiting our website or facebook for latest events and stay tuned for 3rd HCM 2013! Location??? It is top secret for now! 🙂 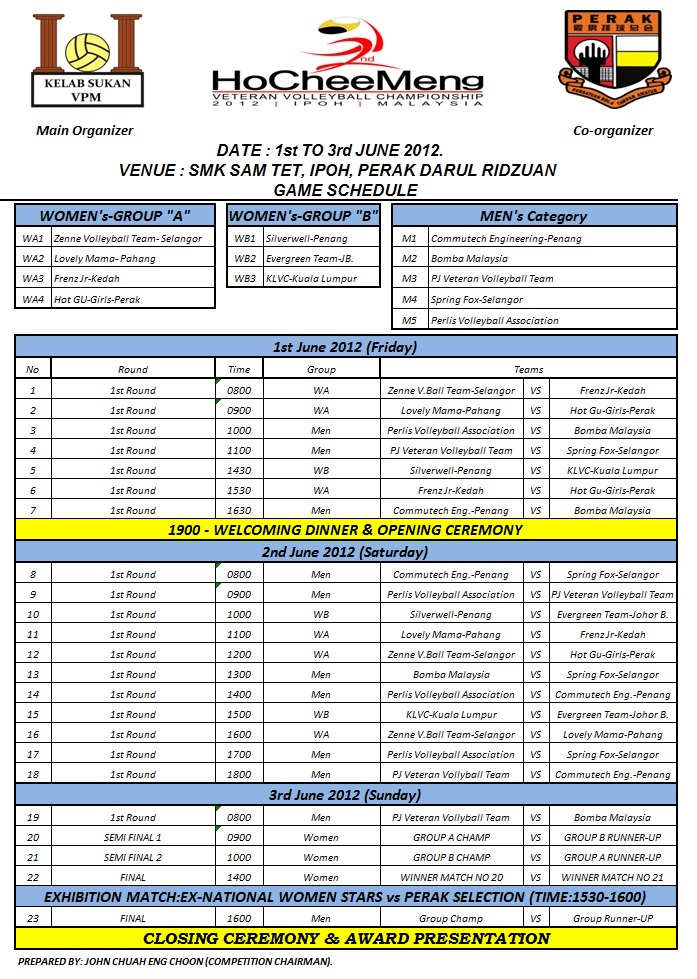 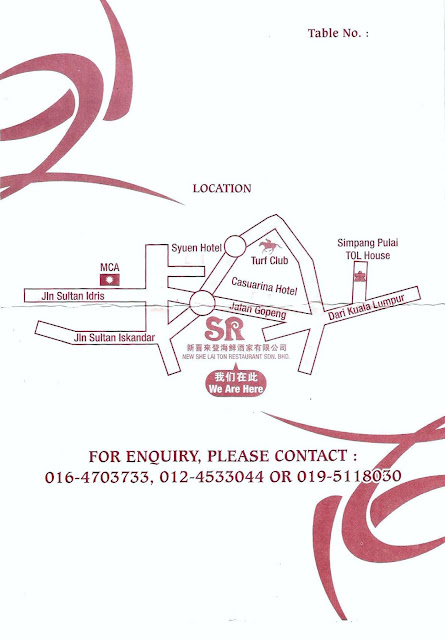 4.2. To encourage fellowship and friendship amongst the players & officials.

6.1. This championship is opened to all invited veteran volleyball teams:-

7.2. Each team is allowed to register up to 12 players in the championship.

7.4. All team manager or their representative are invited to attend and witness the drawing lot :-

7.5. Document to be submitted before the stipulated dates:-

9.3. Players registered as libero shall be allowed to inter-change for each match.

9.4. Players’ registration form shall be submitted to the Competition Chairman 60 minutes before the commencing of the 1st match.

10.2. When there is a tie in sets, 2 teams or more teams during the preliminary  phase the following shall be used to determine the order:-

The team with higher ratio of the points will be awarded the higher position in the group.

10.3. If there is still a tie in points, the following formula is applied:-

10.4. If there is still a tie in points & sets, the following formula is applied:-

10.5. If there is still a tie between 2 teams, the match result between the two teams shall be used to determine the position of those two teams. The team which had won the match among them will be the winner.

10.6. If there is still a tie among 3 or more teams, the final result will be decided by drawing lots.

11.1.    All players in the team must wear the same team jersey with number from 1 till 18 only. The “Libero’ shall wear a different colour jersey.

11.3.    All the Coaches, Assistance Coach and Team Manager are required to wear proper sports attire and shoes (no slippers or sandals is allowed)during the matches.

13.2.         Team which is 15 minute late after the scheduled time without a valid reason shall be considered to have given a walk-over to the opponent team.

14.1.         The Refereeing Committee shall engage qualified referees for the championship.

15.1.         A player who was rejected from the championship due to disciplinary reasons shall be automatically suspended from all subsequent matches pending decision from the Championship Disciplinary Panel.

16.1.         The decision of the referee is final. Any protest shall be referred to the Competition Chairman.

16.2.         The Competition Chairman shall refer the protest to the Panel of Appeal, if the protest cannot be resolved at his level. The team that wishes to make the protest during a match must first inform the referee verbally. Then proceed to play the match “Under Protest”. Only the team captain is allowed to make the protest.

16.3.         All protest must be presented in writing to the Competition Chairman within 30 minutes from the end the match and be accompanied with cash deposit of RM 300.00. The deposit shall be forfeited if the protest is not successful

17.2.         The Panel of Appeal will meet within 1hour upon receiving protest. The result of the panel is final.

19.1.         The Organizer reserves the right to invite any qualified team to participate in this championship.

19.2.         The Organizer reserves the right to decide the result during any unforeseen circumstance in the championship and the result is final.

19.4.         The Organizer reserves the right to change the match sequence and match time when needed. All the changes shall be informed to the Team Managers earliest possible.

19.5.         The Organizer and its appointed officials shall not be held responsible for any accident or lost of the personal belongings during the championship.

20.2.         Any team present with less than 6 players during a match will be considered to have given a walkover to the opponent.

20.3.         All the teams that have successfully qualified for the semi-finals must attend the Award Presentation & Closing Ceremony with a minimum 6 players.

21.1.         Information on special accommodation rates are available from the organizer.